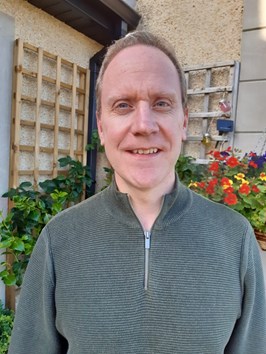 I studied Physics at Queens University, Belfast. I wasn’t sure what I wanted to do after University but I had done a bit of programming as part of my degree and enjoyed it so I decided to do a 6 month software development course. Over the next decade I worked for several companies working in different industries including industrial automation., investment banking, telecoms and the public sector.

How did you become part of Covernet team?

After getting married, when my wife was expecting our first child we came to the decision that we no longer wanted to live in Belfast and decided that we would move closer to her home town in Co. Derry. I thought that I would end up commuting to work in Belfast each day but as chance would have it I spotted an advert for Software Developers at Covernet in the Belfast Telegraph. I sent in my CV and I was invited to an interview in the Europa Hotel in Belfast. I was lucky enough to be offered a job and have been here ever since.

What does a typical day hold for you?

A typical day starts with checking to see if there were any issues with the various automated processes that run overnight. Then there could be a meeting with managers and senior staff to discuss any issues with ongoing projects and a scrum with the Covernet team. After that my day may involve a variety of tasks including development, working on R&D projects, answering customer support queries, assisting other developers with issues they are having in their projects and discussing upcoming projects with the development managers.

What do you enjoy most about the job?

There are always a good variety of projects to work on. I have been lucky to get involved in R&D projects that has involved learning new tech, which I enjoy.  The management team have always been open to new ideas and ways of doing things. There are always people to lend a hand if you need it.

What do you attribute to your career success to date?

Hard work and belief that most problems can be solved with perseverance and willingness to learn new skills and ways of doing things if required.

What is your greatest passion outside of work and family?

I have different interests including swimming, reading or watching the latest box sets but probably my greatest interest is supporting Man Utd and I try to go to Old Trafford once or twice a season to see a match.

Describe yourself in 3 words.